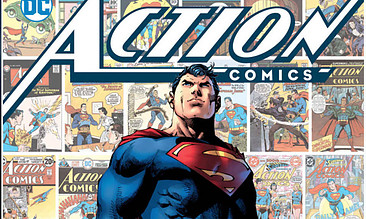 Price: Kindle and Comixology from CND $19.99

The Cheapest Place to Buy: Amazon.com

Featuring: The very first Superman story, the debut of Supergirl, the first stories of arch-villains the Toyman and Brainiac, a never-before-published story from the original creative studio of Jerry Siegel and Joe Shuster, dating back seven decades, and more!

Everyone love superheroes comics. It may not always seem like it, but comic writers strive to make their stories scientifically accurate. Comic books and science go together like bread and butter! Many early comic book stories and characters were inspired by pulp magazines (often referred to as “the pulps”) which were fiction magazines that were published from 1896 to the late 1950s. Most pioneering crime fighters such as Superman used science to solve their problems or gained superpowers in a technical fashion!

Action Comics is the longest-running continually published comic book in history, and it’s the series that launched the superhero genre with the introduction of Superman in 1938. DC Entertainment is celebrating its 80th anniversary with Action Comics: 80 Years of Superman Deluxe Edition, which features cover art by artist and DC Publisher Jim Lee.

Celebrate the hundreds of people who made Action Comics so impactful and culturally relevant for over eight decades with Action Comics: 80 Years of Superman Deluxe Edition.

Hardcover is celebrating the 80th anniversary of Superman’s debut in Action Comics #1 revisiting stories from across the decades and featuring debuts of key characters like Superman, Lois Lane, Supergirl, Brainiac and Toyman. It also features fellow Action Comics stars Zatara the Master Magician, the Vigilante and the Human Target as well.

The book also includes an essay by Paul Levitz, a never-before-published Golden Age Superman story believed to have been written by Jerry Siegel and illustrated by the Joe Shuster Studio, a tribute to Action Comics by Jerry Siegel’s daughter Laura Siegel Larson, an introduction by Jules Feiffer, plus essays by different writers and a new story “The Game,” written by Paul Levitz with art by Neal Adams.

Highlight of This Collection

The Superman Stories in this Collection

Even to this day, most superhero books, shows and movies get classified as Science Fiction. The origins of icons like Superman are rooted in old school sci-fi storytelling! Overall, comics are more concerned with entertaining readers than educating them. However, that doesn’t mean that the realm of superheroes and crime busters doesn’t get scientifically accurate from time to time. Let’s learn more about matter while enjoying reading about your favourite superhero of all time – Superman.

I hope you enjoy this review and if you like, you can leave your own review about Action Comics: 80 Years of Superman Deluxe Edition. You are welcomed to make any comments below.